skip to main | skip to sidebar

Hallelujah, amen - we FINALLY have a 100% gluten-free eatery in Park Slope - until spring at least. The Uncle Louie G's location at Union St. and 5th Ave has closed down for the winter season and in its place is the newly opened Brooklyn Porridge Co., serving sweet and savory porridges, soups, and more. (I hear gluten-free waffle sandwiches are in the works!)

They've been open for less than a week and I've already been at least four times. Just so tasty and convenient. First time out, I tried a savory porridge:


Another morning found me warming up over a breakfast of grits with cheddar, apple, and ham. 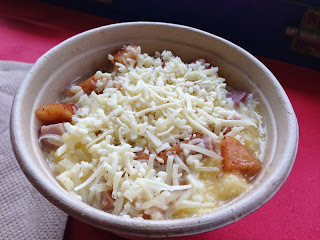 One of the toughest things about being gluten-free is finding savory snacks and meals on the go. You can always grab a yogurt or fruit/nut bar, but what we really need are hearty savory things - and Brooklyn Porridge Co. certainly fulfills that need in Park Slope!

Posted by Gluten-Free New Orleans at 9:50 AM

Blog (and This Blogger's) Background

I was always an avid home cook and restaurant-goer. From my teens on, my idea of "going out" generally involved some form of social eating. I grew up with a huge extended family that regularly dined together and I was in the kitchen helping my grandmother from an early age.

I often joke that I come from deli royalty, as my family owned one in Brooklyn for almost 30 years - so there was always a ton of good food around. Seemed only natural when I started working in restaurants in my early teens, though an accident with a dull knife and my left index finger ended my back of the house aspirations along the way. I've had pretty much every front of the house position at all types of venues, including a few years at Moosewood Restaurant. In my mid-20's, I started to work in healthcare, and have always maintained a love of food and eating well. In 2010, I melded my passions for health and food by completing a master's in public health nutrition.

After being diagnosed with celiac and DH back in 2003, I didn't go out to eat for three years! I don't even remember how long it was before I felt competent enough in the kitchen again to be a gf hostest with the mostest. But that was 10 years ago; I've changed along with the gf product/knowledge landscape. Back in NYC after many years in upstate NY, I'm committed to having a social eating life again, dishing up good eats at home and enjoying what gf vittles NYC has to offer. As any gf person can appreciate, this involves a fair amount of research and planning. Seems a shame to keep all that I've learned to myself; hence this blog.